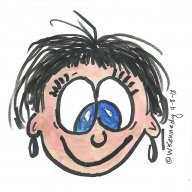 Black_Dragon43 said:
I will preface this post by saying that I am a retard, and everything I say here is stupid, and nobody should listen to me because I don't know what I'm talking about. I am not a psychiatrist nor a mental health professional and if you have mental disorders, then you should seek out a professional therapist, and you should definitely not listen to my stupid opinion. In fact, I advise you not to read my post. I do not intend to render advice to anyone (medical or otherwise), and I am not in a position to do so, and by continuing to read this, you acknowledge not to take any advice from me and to ignore everything that I have to say, because it is stupid and gibberish.

Now that we have universally acknowledged that, it's time to move onto the more important business:

Well, the things you should "NEVER" say to a depressed person are EXACTLY the things they should be told, but will REFUSE to listen to, and "act out" in protest to hearing them. That's EXACTLY why they act out... it's like the person covering his ears, desperate not to hear the truth! And when someone shouts the truth in his ears, they lose it, and "act out". Hence the term snowflake, because they melt under pressure.

That's why they're depressed. Because they refuse to accept an essential part of their reality. They are literarily and figuratively "covering their ears" by being depressed. And everything else that they do - the pills, the medication, the therapy, the EFT, the bullshit... it's a distraction from their refusal to accept reality - a decision, to go on being depressed. And it's NOT going to help them AT ALL in the long run, because it distracts from the core of the problem: refusal to accept reality.

Until they face the music and ACCEPT the pain, willingly, in fact, bear the pain, their depression will not lift. "Uhhh I don't feel like getting out of bed"... "f*ck it, do I want to keep being this pussy who stays in bed letting life slip by?! f*ck that, I want to be a BEAST who overcomes the pain *jumps out*! "

You don't need to feel better to start taking action. You just need to f*cking get moving. And you need to develop pride in growth - ie, in taking action DESPITE how you feel. I feel like shit? That's great, my victory once I take action will be even greater. I will be a real beast who cannot be stomped down or put down by my feelings.

Who? A guy like Jordan Peterson whom you linked to previously, who has been depressed for his entire mother f*cking life, has been on SSRIs, benzos and a whole host of other medications, and has personally asked their doctor to increase his dosage to very high levels to the point that he almost got killed by them because he "needed it" to cope with the stress? Would you go to learn swimming from a guy who has tried his entire life to swim and failed? Or would you rather seek out a BEAST like Michael Phelps, and learn how he swims?

Jordan Petereson is a smart thinker, but he is ambivalent about his own philosophy, and often does not put it in practice. He is not someone to learn from things other than theory imo (at which he's very good, I listen and follow him as well). I mean, in 40+ years he could not cure his own depression, and he's a f*cking therapist? Really?! What sort of accountability is that?

It's because there is ZERO accountability. NONE. Many of these therapists are f*cked up themselves, and they keep helping people for 30-40 years, with basically NO results. NONE.

And I disagree with Dan Pena about a lot of business things, but in terms of mindset and what he says about personal development, he is imo 100% right:
View: https://www.youtube.com/watch?v=rtWzbFu_S4Q&ab_channel=CreateQuantumWealth


So the first thing is to stop modeling failures. And start modeling people who were depressed, and have overcome it. Completely. Not kinda overcome it. But completely. They are cured. That's who you want to listen to.

Personally, and I don't recommend anyone else to adopt this attitude, I have very little trust of the medical profession as a whole. And especially of mental health professionals. If I had listened to my psychotherapist, I'd probably still be taking anxiety medication today. I took in all:
• SSRI (Lexapro - for 2 years)
• Benzo (lorazepam - for 1 year)
• Antipsychotic (Quetiapine - for 1.5 years or so)

Now guess what, I take nothing. And I've been taking nothing for like 8 years already. Built a successful business, got an apartment, building a family, you know, the good stuff.

The bottom line here is the following: depression, as many other mental illnesses, are to a large degree self-caused. Meaning that there is RESISTANCE from the patient in overcoming the illness, and that's exactly why they continue to be ill. And there is NOTHING anyone can do until the patient says "f*ck IT! I wanna change, whatever it takes, I will do. If you tell me to jump outta bed at 3 in the morning and go without sleep for 24 hours at a time, and that's what it takes to cure it, I will do it! I will not come to you with excuses, like I tried to get outta bed and failed. I don't care how f*cking painful it is, I'll do WHATEVER IT TAKES!!!!"

If the patient keeps coming up with excuses, acting out, and so on, then therapy can just "manage" them. A little trick, here and there, to keep them from acting out. That's all. But cure requires an effort of the will. A DECISION TO ACCEPT REALITY WHATEVER IT IS. Something has to change from the inside. And if you don't find that strength inside of you, well then, there is very little that anyone can do to help you.

You know, I have a pet theory of mine. I think that ultimately, when the shit hits the fan, the strength has to come from inside. If you cannot find that BEAST inside of you, that will simply not quit, no matter what, no matter how hard or how painful it gets, then you're f*cked. Nobody, and nothing can save you. No therapy, no drugs, nothing. It's also part of the reason why many, in the face of extreme pain, commit suicide. They do not find that inner beast that will keep them going. You know, that beast that made Rocky get up one more time in the movies when he was destroyed... That beast is not rational. And it's unrelenting. It can push you and make you do amazing things, things that you would think are impossible. That beast, is pure desire, pure thirst, pure hunger. When you can't find that beast, then you're in trouble. And it's not the kind of trouble, unfortunately, that someone can really help you with from the outside.

So the idea that there is some help that can come from the outside and save you, when you're depressed, is imo wrong. And it's nothing but another distraction, waiting for Godot to come and save you, and of course, he never comes. It's just a defense mechanism, a distraction, that you have conceived to cover your ears from what you do not want to face. It's this "not wanting to face" that drives people to both depression AND to suicide. If you're open to face ANYTHING, then you'd never kill yourself. There would be no reason to do it. The only reason is desire for escape. And the solution is to stop trying to escape the pain. Accept it. Acceptance is truly transformational. The Stoics used to say amor fati... love your fate, love your pain. Embrace it. Swallow it whole. Eat that frog. Overcome.
Click to expand...

I totally agree with you. And for me, it goes further. I know that the stronger cause I make, the more resistance and push-back I receive. So, when that flack comes my way, I know I'm going in the right direction. I don't just accept my fate, I tend to glory in it when it concerns my current project or quest. If being successful was easy, everyone would do it. Yes, life is hard. Yes, the people around you are going to throw rocks in your path. It's going to hurt at times. You end up alone at the crest of the mountain. And that's as it should be.
Don't like ads? Remove them while supporting the forum: Subscribe to Fastlane Insiders.