I have read The Millionaire Fastlane as well and enjoyed it a lot.

Glad to be part of the community

MJ DeMarco said:
Now that there are over 100,000 copies out there in the wild, multiple language translations, etc. this is the thread to let me know that you've read The Millionaire Fastlane. 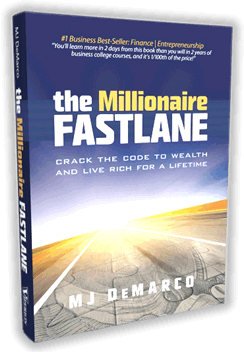 If you read the book, post here and you will get an icon under your screenname and additional forum privileges. (Private forum, more PM storage, etc.)

Feel free to post your comments about the book as well!

MJ DeMarco said:
Now that there are over 100,000 copies out there in the wild, multiple language translations, etc. this is the thread to let me know that you've read The Millionaire Fastlane.

If you read the book, post here and you will get an icon under your screenname and additional forum privileges. (Private forum, more PM storage, etc.)

Feel free to post your comments about the book as well!

I have read the book.

Read TMF and loved it.

I don't know why I never joined the forum

One of the few books I've read twice.
P

Read the book and instantly picked up Unscripted. Almost finished both within 2 weeks!

Read the book and been listening to it again in audio book format. Really helpful!
K

I've read the book, I'm looking for a change and I think this book will change how I think about things! Thanks.
S

Read the TMF six months ago..lead to a decision to work 4 days a week instead of 5. Hoping to delink time and money, so days worked can be further reduced. One of the few books I'm about to re-read.

I've have never met MJ DeMarco, but he knows me better than I thought. A lot of eyeopeners in the Millionaire Fastlane. To be honest; reading it hurted me sometimes a little bit, because I have to admit that I need to change a thing or two in my life. MJ: Thanks for the inspiration, your book in general and this forum where I can meet likeminded men and woman!

Read TMF, wasn't able to get everything into my head with one run but
i'm rdy for the second read through.

Benjaminjhs said:
I've read Millionaire Fastlane - And can I say what a life-changing book it was. Reading the forum now and doing some research before throwing myself over 'UNSCRIPTED'.
Click to expand...

Read The Millionaire Fastlane a few years back. Completely resonated, but I continued on the slow lane with some remedial action along the way. Now I've read Unscripted a few times and it feels like the doors have blown open and I'm ready for action time. Its never too late - just begin.

Read the book. I will read Unscripted in English and it gonna be a nice challange for me

(it's not translated into my language

). But now the most important thing is to focus on process.
J

Read the book. Definitely got a few fantastic takeaways and excited to put them to work within my business!

I want to thank and appreciate MJ for his life-changing work, with The Millionaire Fastlane book (I've read it) and the forums (I read a lot here before joining).

But he can point out how to recognize our own MOST LIKELY worthwhile steps to try. If we don't like the view better from there, we can try a different direction next time. A step back sometimes for hopefully two more forward, if we're doing it right.

MJ mentioned that one of his purposes for what he does is to create a legacy that will outlast him. I believe that's already assured... for as long as this Internet doth endure ;-)

In my late 40's, I think I'm a bit older than MJ. But that doesn't keep him from being an excellent role model for me in several ways. And I'm not ashamed to say that when I grow up, I'd like to be more like him. ;-) At least, in terms of the skills and attitudes he used for his successes. I tip my hat, sir!

I can have a review of the Fastlane book in a while, if new reviews are still useful. I can summarize: it's one of the very best business books I've ever read, and I've read a lot of 'em. My only areas of disagreement are some of MJ's opinions about things other than business. I think he put them in not just to express his opinion, but to catch the attention and sustain the interest and desire of some business builders younger than I am. So what? For the business content itself, I have no reservations about his advice. That's where it's appropriate for me to shut up and learn.

I'll make some other posts about what brings me to the forum, what I'm working on now, and how I see myself contributing here.

I've read the millionare fastlane. Let a friend borrow it and he hasn't read it for months, some people don't take advantage of help given even if you hand it to them.
K

EJK said:
I've read the millionare fastlane. Let a friend borrow it and he hasn't read it for months, some people don't take advantage of help given even if you hand it to them.
Click to expand...

Read the book about a year and a half ago while on vacation in Grand Cayman. I work on a trading desk and what I found stunning was how the most successful people on my floor (especially two) always seemed to tout the same ideas as those in the book. It turns out one of them already read it, and the other really wanted to read it when I described it's contents to him. Great material inside.
S

Read the book. Let's see if I can make something out of it. Unscripted will follow soon.

I just finished reading Millionaire Fastlane today. I recently made a decision to upgrade every part of my life, physically, mentally, emotionally, financially. I started working out every day and now feel better and better every day, with much more energy and a lot less anxiety and resistance to life. Started eating a lot better a couple of months ago. Stopped giving a f**k about so many things that are a waste of time and energy. I read Rich Dad Poor Dad and thought it was a big deal, but then I picked up Millionaire Fastlane which blew that out of the water.

I'm starting to generate better and better ideas on how to generate wealth and what I need to learn to get it done. I'm learning to code websites and apps because, even if I don't sell those, they will help me sell whatever I decide to sell for the rest of my life, and since I'm starting with nothing, I need to do things myself, for now.

I'm 48 years old and finally have ended my lifelong love affair with laziness, resistance and procrastination. Thank you, MJ, for sharing your insights and advice! I'm taking it to heart and I'm taking action! One of my first goals is to never be anyone's employee again within five years.

I'm half way through my UNSCRIPTED(kindle) and it helped me tremendously adopt different perspectives and pay a lot more attention to 'value' and 'creation', not 'money' and 'consumption' like I used to.

I'm sure you'll enjoy his next book too!

I read "The Millionaire Fastlane" few years ago. It inspired me to obtain and learn a lot of useful skills that I can actually sell.
Time to get inspired at this forum! Cheers

I read the book a couple of months ago, it lit a fire under me to get moving!

Read it few years ago and help me a lot.

Switzerland, at the lake of Lucerne

I read the book.

Feedback about the book:
Great Stuff, MJ! Your book is a must-read in my opinion. Amazing!

The key Point I personally liked the most:

Read! Its one of my favorite books of all time. I haven't read it in a couple of years so I'm due for a re-fresher.

Read the book. Thanks MJ for offering me the red pill.

I've read the book and I'm forcing it on a few friends.

If there was a time in my life that I could point to that has a definitive before and after it would be when I first read Millionaire Fastlane. I'm not a millionaire yet but I had a definite paradigm shift from reading the book.

MARKETPLACE How To Create A 100K-1M+ Sales Funnel
Is this a sales funnel? :innocent: :halo: reminds me of russell's sales funnel to give you...
41 minutes ago
Lyinx

MARKETPLACE Fox's Web Design Guide: Earn $100K this year (Yes, 2020!) and Go Fastlane
Just had a personal highlight of the program so far - @GuitarManDan gave a one hour Zoom talk on...
Today at 1:12 PM
Simon Angel

MARKETPLACE KAK’s “Kill Bigger” Incubation Program- With DAILY personal attention.
I joined @Kak's business incubator in the first week of May. During our daily chats we uncovered...
Today at 11:10 AM
MTF

MARKETPLACE Lex DeVille's - Advanced Freelance Udemy Courses!
This is your May reminder that you can do this. I'll keep it short. These are the May promos...
Monday at 11:18 AM
Lex DeVille