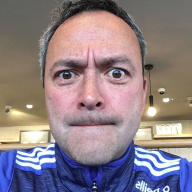 Once upon a time, in a small office in Dublin, we were sending traffic to a London Hotels landing page by bidding on the broad match keyword “london”.

Even with very low bids, the keyword was unprofitable, and the AdWords specialist running the campaign had been repeatedly dropping bids to stop losing money.

She had gotten into a vicious circle of dropping bids and losing traffic, until eventually the traffic dried up completely.

Of course, we were eligible to show for search terms like “plumbers london” or “cars for sale in london”, but our London Hotels ad had such a poor CTR that Google decided we weren’t relevant enough, and therefore not worth showing very often.

Even worse, since we were bidding in broad match, our ad was eligible to show when the searcher typed in a search term that contained none of the words in our keyword.

In particular, since we were using a one word broad match keyword, we weren’t helping Google much by telling them when we wanted our ad to show.

And we were very likely showing for search terms that didn’t even contain the word “london”.

When we looked at the Search Term Report we found loads of search terms used by people blatantly not looking for a hotel in London.

Another search term was “uk sexy girls”, and we didn’t want to guess what the intention was there.

The weirdest search term we saw was “you tube”.

Why on earth would someone click on an ad for London Hotels if they typed in “you tube”?

Maybe it was just a misclick?

Then again, why would Google even show our ad when someone typed in “you tube”?

Then we remembered that the London underground is called the Tube.

Which made us realise how tenuous broad match can be.

Bear in mind that the Search Term Report only shows the search terms that brought you clicks if someone using that search term clicked on your ad.

So our ad was probably showing for even less relevant search terms, but we couldn’t see what they were because our ad was so irrelevant that no-one had even clicked on it.

Meaning that at least our ad would only show when people had “london” somewhere in their search term.

Which was still pretty poor, but better than what we had previously.

We left the campaign for two weeks without touching it.

We started to see the CTR rising, the ad position rising, and the CPC falling.

Meaning our ad showed less than 10% of the time it was eligible to show.

But one day it pop up above the 10% mark, and we watched it rise daily through the teens up to the dizzy heights of 20%. (High given we were bidding something like €0.20.)

The campaign started being profitable, and we were even able to push bids a little bit to bring in more traffic at the expense of eating into our profit margin.

I’d had a very hard time convincing anyone in the team to move away from broad match.

The common worry was that we would get less traffic.

My argument was and still is that, yes, we’re closing the top of the funnel and are eligible to show for less search terms.

Meaning we’re going to get a higher volume of more relevant traffic.

If we’re only getting a 10% impression share with a wide funnel, then you could visualise it like this: 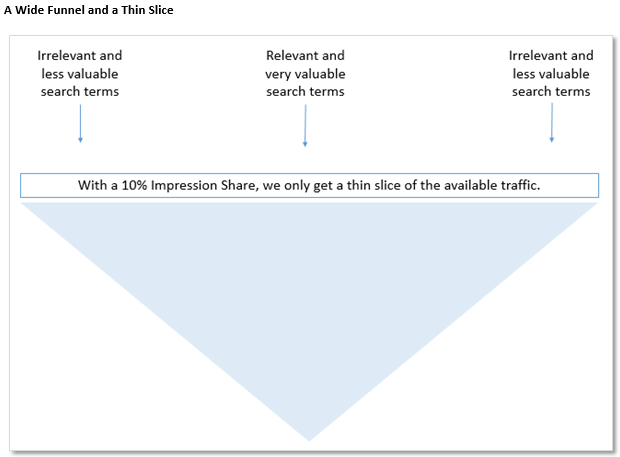 If we narrow the funnel then we should reduce wasted impressions, increase our CTR because our ad is more relevant, and be rewarded with a higher impression share. 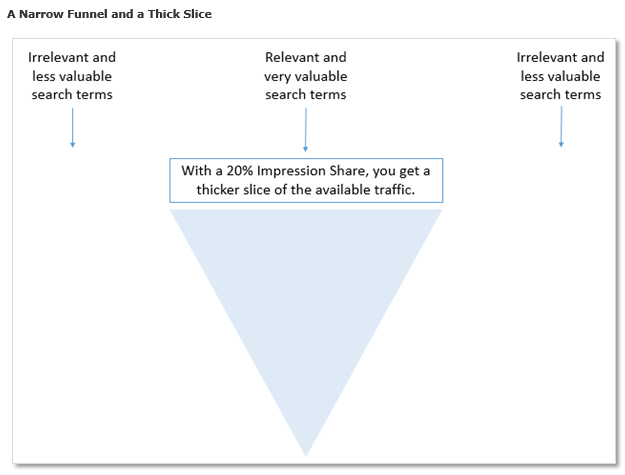 As mentioned before, I’d recommend having the narrowest funnel possible, and maxing out your CTR to get the full love from Google.

But there’s more conclusions that we can derive from the two visuals above.

If we imagine that the search term “cheap hotels london” is the most valuable to someone advertising hotels in London.

Maybe you have to bid €2.00 to even appear on the bottom of the first page of Google.

Then if we were bidding, say, €0.40 to hoover up the (ahem!) “cheaper broad match traffic”, I would be willing to bet that our impression share for “cheap hotels london” would approach 0%.

Meaning our 10% impression share actually comes from all the junk keywords at the side of the funnel, and that thin slice of traffic is actually a curve with thick sides and a very pronounced dip in the middle.

So if our conversion rate is too low and we have to drop bids even more, then our ads are less and less likely to show for the search terms that are likely to convert (the valuable stuff in the middle).

So dropping our bids can have the effect of showing our ads more often for the search terms at the side of the funnel.

Which drops our conversion rate even further.

And we crash and burn … again.

Using broad match unwisely means our ads don’t show for the search terms we intended them to show for, allows traffic to go to different keywords in our accounts depending on Google’s preference rather than ours, and now can also change our conversion rates if we amend our bid prices.

Want to come back up for air and apply what you've learnt?

Read this post.
Don't like ads? Remove them while supporting the forum: Subscribe to Fastlane Insiders.
Last edited by a moderator: May 6, 2018
Never worry about numbers. Help one person at a time, and always start with the person closest to you.
- Mother Theresa 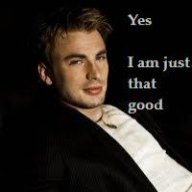 Reminds me of how frivolous exposure is if you can't locate the core desires of a market (I always spend time thinking on it), but this is the back end of it and you are tweaking in such a way that it is pressuring you to be relevant by default.

After following the rabbit hole of your links I found an article that said "narrow and deep", meaning that you convert them into repeat business (deep), and keep the terms as broad as you need (narrow).
In essence, deepening and narrowing serves to remove dependancy and is an action of boldness/confidence.

In yet another article you mentioned the 50/5 rule (where 50% of profit comes from 5% of your custommers) which is further indicative of how narrow focus can pay off the biggest. 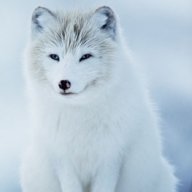 Do I just increase my max bid in order to get to position #1 and therefore actually get some clicks?

Thanks for helping me (noob) out -- I'm sure others are wondering the same thing.

Do I just increase my max bid in order to get to position #1 and therefore actually get some clicks?
Click to expand...

53 impressions is almost nothing. You'll have to add more keywords. At best you should expect 5-6 clicks if you're at position #1 with that amount of impressions. If you still don't have much impressions after adding keywords and giving it some time then you hit a dead end. I would avoid raising your max bid because $10 is already pretty high. Also I noticed that you started advertising on Linkedin. Don't expect more than 5-10 clicks from 10,000 impressions. Nobody likes banner ads. If they do click on them then usually it's by mistake. In fact a lot of people don't even see them now. One of the most popular plugins for browsers are ad blockers.
Don't like ads? Remove them while supporting the forum: Subscribe to Fastlane Insiders.

You want to be in as high a position as possible, to get the highest CTR possible, and therefore the most visitors.

(This assumes your match type isn't allowing Google too much control over what search terms you show for when you adjust your bids up and down, and that your conversion rates don't change as your ad position changes.)

I'm guessing you don't want to be negative for too long (i.e. you don't have the deep pockets to be doing one of those "branding" campaigns that increases "brand awareness").

So I'm guessing this is a direct response play and you eventually need to be positive ROI.

Soooo... you bid as high as you can such that your CPC is lower than your EPC by the required margin.

... and let your position and CPC be whatever that works out to be.

The only time I say a CPC is too high is when it's unprofitable.

My target ad position is always position 1. But only when it's profitable.

So the name of the game is to keep increasing EPC's so we can keep pushing bids and ratchet open the tap at the top of the funnel.

It all depends on the ROI for that search term.

As you get more precise with your bidding (by search term if possible and if the return justifies the intricacies of the campaign), you get more control over the individual ROI per search term.
Never worry about numbers. Help one person at a time, and always start with the person closest to you.
- Mother Theresa