Anything related to bitcoin, crypto, blockchain
Sort By Best Posts 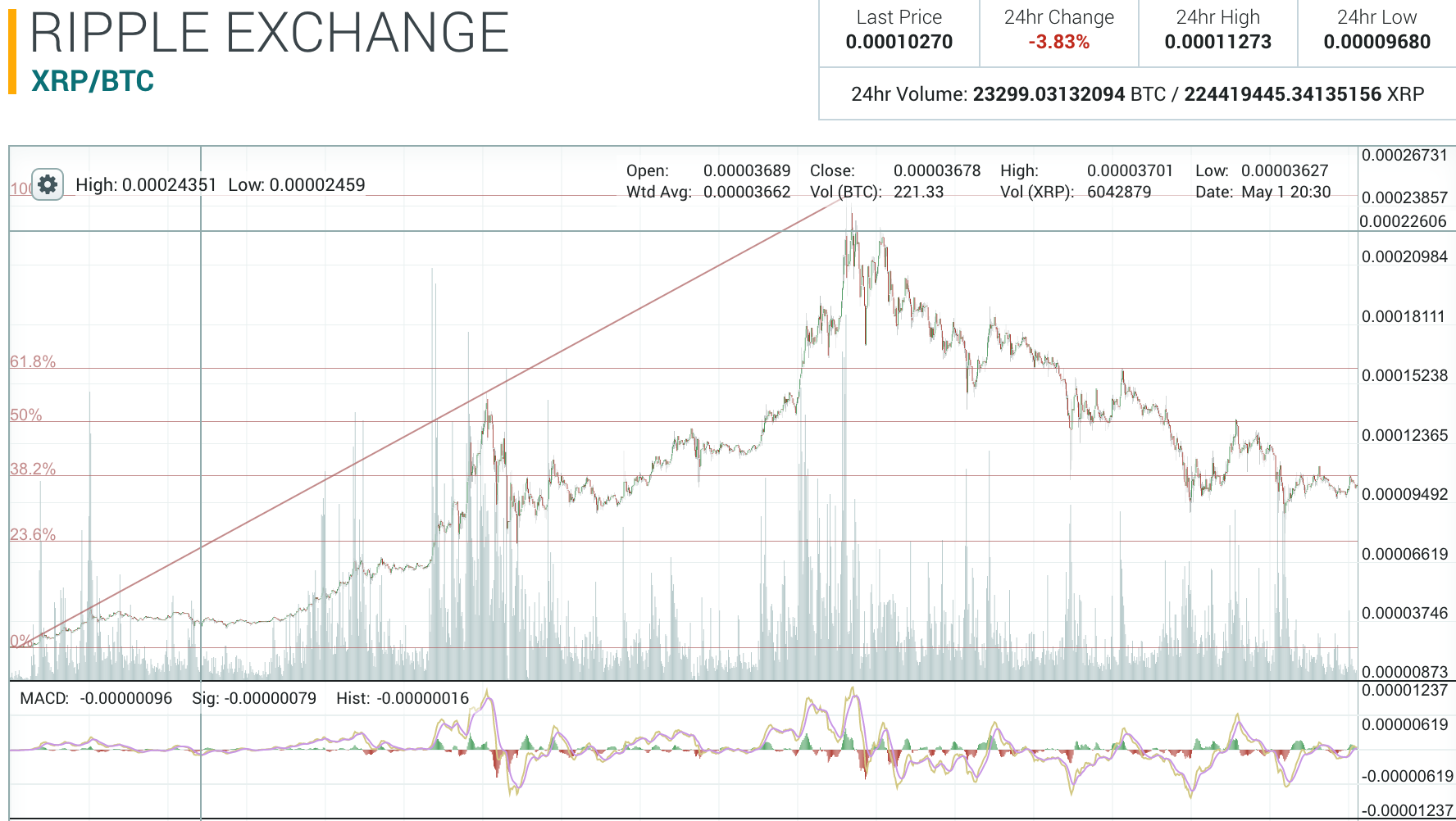 After 3 successful runs with XRP, with the first one making me $400+ easy profit..

I finally am left with a little bit of Ripple that's on the downslope. It's been falling steadily although it's seeming to stabilize as of late. The fourth time wasn't the charm hitter unfortunately, so at this point I'll just leave a few thousand Ripple to be by themselves for the next few months or even years, no problemo.

It's turned into a long hold, which may either turn out extremely well, or it may give decent profit but the opportunity cost could be a little iffy (depending on the time frame it'd take for me to make the money back and profit). So far I haven't sold in the red a single time, but I know part of it is just luck. Can't be blind, I mean the paranoid are the ones who survive in times of crisis. A good quote I go back to always is, "Hope for the best, expect the worst!".

With BTC going up (and then crashing a bit, although generally going up like a madman) of course the altcoins are affected. Some more so than others (for example, Ethereum) but if you know what you're doing, you can either use this to your advantage (buying up a lot of cheap coin) or freak out and panic sell

If you're the latter, well then.. THANK YOU as I'm always excited to buy more coin!

The best thing to do is to try and buy low, sell high within a few hours or within the day. With giant fluctuations like the ones crypto gives us (25%, 50%, even up to 150-200% WITHOUT PUMPING) it's easy to see how you could make a fair amount of cash and even go in MULTIPLE times into the same crypto. I think there's more money to be made selling XRP on a high, waiting for it to crash a bit, buying in again, selling, repeating the process than holding on to it for long term unless it's right before a big update. For example, XRP might go up quite a bit with June updates (if they're big enough, to be quite honest I think it'll help with pricing but XRP will need some way bigger news to truly go to the moon so I think it'll be a bit more time, but eventually it will go big). If you do get stuck though with some coin, go for the long and never sell UNLESS you bought into a worthless coin that has nothing supporting it. I always try and go for stuff that at least has good volume to it. So what if you can profit a lot when you CANNOT sell? Not enough demand? Well, you won't see me there.

If you get stuck holding coin, then hopefully you have enough money to spread out risk and have invested in like 10-15 other coins so honestly you could care less about whether you made or lost money that day. With crypto, it's hard to predict what could happen even on a weekly basis now.. so maybe at the end of the day it's best to have a few long holds amongst the short higher risk buys. Stuff that I see a lot of potential with currently is STEEM and still ETH of course. It's great to see that I've more than doubled my investment with Ethereum, although I got in quite late.. (sad to see my friends quadrupling, but oh well, more motivation!).

I don't think on the normal stock market you'd be able to go through multiple runs within the same day expecting big results. Now, it's safer to go for 10-20% and divide up the risk, but even those numbers PER DAY seem crazy with stocks. Unless you're talking about penny stocks, which have like 10x more risk than cryptos. If you know what you're looking for, high volume coins are less susceptible to market manipulation by whales. There's a few really nice gems out there.
Don't like ads? Remove them while supporting the forum: Subscribe to Fastlane Insiders.

It's funny seeing my old posts on this forum. I posted about Steemit last Spring and had it removed due to "spam". I actually posted less on this forum after that and just laughed it off.

Currently XRP is approaching $4, Steem hit a peak of $8 when back then it was $1 and SBD inflated 1,600%. All my other coins have been seeing anywhere from a few percent to even up to 120% daily returns.

Now granted, this ISN'T a normal week in crypto. But it's interesting seeing how many more people are finally curious to invest.

bitcoins said:
It's funny seeing my old posts on this forum. I posted about Steemit last Spring and had it removed due to "spam". I actually posted less on this forum after that and just laughed it off.

Currently XRP is approaching $4, Steem hit a peak of $8 when back then it was $1 and SBD inflated 1,600%. All my other coins have been seeing anywhere from a few percent to even up to 120% daily returns.

Now granted, this ISN'T a normal week in crypto. But it's interesting seeing how many more people are finally curious to invest.
Click to expand...

Thanks for sharing your post previously! To be fair, crypto can look quite different from the outside, but I'm glad that it gets some attention these days.

I personally don't day trade at all, first because I believe I'm not as patient and mainly because I simply don't have the time for it. It's a nervous game for me where I'm not good with controlling my emotions.

What I do believe in though is in the fundamentals of some of these coins (in which I invest personally as well), but with those I do have a horizon of 1-10 years (some shorter, some longer). As long as the general market goes up, I'm doing just as good as when I'd daytrade but with less stress

But if you can do it and follow strategies, more power to you!

MARKETPLACE  You Are One Call Away From Living Your Dream Life - LightHouse’s Accountability Program ⚡
What I got was completely unexpected; @LightHouse generously talked with me for 2 straight hours...
Yesterday at 4:47 PM
Arun Siva