I would say: to leave your mark. Leaving some sign that you were here on Earth.

Leaving your mark is surviving past your time. The type of mark you choose to leave is what determines what you do day to day. Some people don't know the type of mark they want to leave.

How To Worry Too Much: HOT TOPIC - What happens when you quit your job?
-
Starting Mindset: To the Slowlaners from a Slowlaner...we CAN do this.​

RayAndré said:
What is your primary purpose in life?
Click to expand...

to live according to my understanding of life

nothing more, nothing less


5 % : the yang of society, the brain who knows what it wants

---> politicians, entrepreneurs, enlightened masterminds behind the scenes and so on


95 % : the yin of society , the energy that is used to execute the plans of the mastermind

in this world , you are either the mastermind of your system or energy in society. 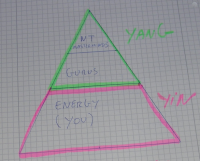 Do I really look like a guy with a plan?

GMSI7D said:
to live according to my understanding of life

nothing more, nothing less


5 % : the yang of society, the brain who knows what it wants

---> politicians, entrepreneurs, enlightened masterminds behind the scenes and so on


95 % : the yin of society , the energy that is used to execute the plans of the mastermind

in this world , you are either the mastermind of your system or energy in society.

In short, one may say anything about the history of the world--anything that might enter the most disordered imagination. The only thing one can't say is that it's rational. The very word sticks in one's throat.

And yet we all know that those very people sooner or later have been false to themselves, playing some queer trick, often a most unseemly one. Now I ask you: what can be expected of man since he is a being endowed with strange qualities?

Shower upon him every earthly blessing, drown him in a sea of happiness, so that nothing but bubbles of bliss can be seen on the surface; give him economic prosperity, such that he should have nothing else to do but sleep, eat cakes and busy himself with the continuation of his species, and even then out of sheer ingratitude, sheer spite, man would play you some nasty trick.

He would even risk his cakes and would deliberately desire the most fatal rubbish, the most uneconomical absurdity, simply to introduce into all this positive good sense his fatal fantastic element.

It is just his fantastic dreams, his vulgar folly that he will desire to retain, simply in order to prove to himself--as though that were so necessary--that men still are men and not the keys of a piano, which the laws of nature threaten to control so completely that soon one will be able to desire nothing but by the calendar.

And that is not all: even if man really were nothing but a piano-key, even if this were proved to him by natural science and mathematics, even then he would not become reasonable, but would purposely do something perverse out of simple ingratitude, simply to gain his point.

And if he does not find means he will contrive destruction and chaos, will contrive sufferings of all sorts, only to gain his point!

He will launch a curse upon the world, and as only man can curse (it is his privilege, the primary distinction between him and other animals), may be by his curse alone he will attain his object--that is, convince himself that he is a man and not a piano-key!

If you say that all this, too, can be calculated and tabulated--chaos and darkness and curses, so that the mere possibility of calculating it all beforehand would stop it all, and reason would reassert itself, then man would purposely go mad in order to be rid of reason and gain his point!

I believe in it, I answer for it, for the whole work of man really seems to consist in nothing but proving to himself every minute that he is a man and not a piano-key! It may be at the cost of his skin, it may be by cannibalism! And this being so, can one help being tempted to rejoice that it has not yet come off, and that desire still depends on something we don't know?

You will scream at me (that is, if you condescend to do so) that no one is touching my free will, that all they are concerned with is that my will should of itself, of its own free will, coincide with my own normal interests, with the laws of nature and arithmetic.

Good heavens, gentlemen, what sort of free will is left when we come to tabulation and arithmetic, when it will all be a case of twice two make four? Twice two makes four without my will. As if free will meant that!

RayAndré said:
Leaving your mark is surviving past your time.
Click to expand...

The Commandment of Time should help in this area because your creative invention will survive separate from your time. For instance, if my books survive transcendence, it's likely they still might have some popularity after my death.

GMSI7D said:
to live according to my understanding of life
nothing more, nothing less
Click to expand...

So your purpose is on the action you take throughout your life? Not on the output of those actions?
How To Worry Too Much: HOT TOPIC - What happens when you quit your job?
-
Starting Mindset: To the Slowlaners from a Slowlaner...we CAN do this.​

MARKETPLACE Fox Web School "Legend" Group Coaching Program 2021
Yeah, your youtube channel is incredible and all the videos I have seen so far are really great...
Jan 19, 2021
StephanBg
M
FEATURED! Introducing... WEALTH EXPO$ED, A Short Story By MJ DeMarco
Finally! I just launched a short story on Kindle (FREE if you have Kindle Unlimited)! After...
Jan 5, 2021
Gregory Carson