I am eighteen years old, and am currently in college to all you American college haters, here in the uk it's completely free, part of the reason I'm at college is because it means in government terms im still a child and can claim benefits. While I'm enjoying my course (music technology) it is also a great time for me to brain storm and start things off at a young age since I have more time on my hands than most people.

There is a possibility my music tech course helps me get a pretty high paid carrer but I mostly see it as a hobby, I'm listening to music all the time so I thought why not learn how to produce etc..

I'm on this forum because when I'm not at college I'm trying to make my concept ideas a reality. I have been talking with a concept investment company with quite a large team with different departments that can help with different sides of app or website ideas.
It's very early days I have been speaking with them for about two months but I have sent over a few business templates and discussed the idea in length and they genuinely seem to think it could go somewhere. I have a Skype call with the tech team there in a week just to discuss the basic functions of the app and how it will be used by each user so they can get a gist of the startup costs.

The only problems I can see are when it comes to raising my side of the share, I'm not from a wealthy back ground and don't really know anyone who would have that kind of money let alone trust me with it, and something tells me this idea is an expensive one. Nevertheless I'm happy as to where I have got so far it's nice to see expirenced investors\developers take an interest in your concept even if it doesn't go anywhere I still see it as a win and a chance to gain a lot of knowledge of the industry.

I know people say making the app isn't even half of it and I completely get that it's same as being signed by a record lable and not releasing any music. I do have a well thought out marketing plan that won't break the bank and I think this investment company would agree.

I'm interested in what anyone with expirence about app developing, marketing, investing has to say so any advice along those lines is much appreciated.

Outside of a few app ideas, a good instinct ,creative thoughts and a natural business mind set I don't really bring much else to the table, I have no expirence in coding, I don't have any large sums of money saved up in anything but as much as I am skeptical im also like anyone on here a massive dreamer and since a very young age it has always confused me that people work a job they don't enjoy just to stay alive and carry on working that same job.

Thanks for reading, I haven't updated my Facebook status since I was 12 so this is a weird one for me haha.

Have a good one.

Welcome to the forum. We aren't all college haters. Actually most aren't. What is hated is the debt that comes with an education that only serves to land you a JOB. Education is one of the few things in life that nobody can take away from you. If you can get it without going into debt and/or use the knowledge to launch yourself into the fastlane then by all means go for it.

Glad to see another young entrepreneur realize that there is more to life than the scripted mantra. I hope we see your progress and stories about your successes.
Last edited: Mar 6, 2018
Be inspired. Take action. Move forward. Learn. Grow.

RobD88 said:
Welcome to the forum. We aren't all colleg haters. Actually most aren't What is hated is the debt that comes with an education that only serves to land you a JOB. Education is one of the few things in life that nobody can take away from you. If you can get it without going into debt and/or use the knowledge to launch yourself into the fastlane then by all means go for it.

Glad to see another young entrepreneur realize that there is more to life than the scripted mantra. I hope we see your progress and stories about your successes.
Click to expand...

Yea don't get me wrong I can absolutely see why there are college/education haters out there, I despise the education system myself I could talk about the problems with it for hours, but i still cannot deny it can lead to great things and can be a good chance to think about your fast lane ideas before your trapped in it all.

Thanks for the warm welcome man.
M

We aren't college haters, we hate debt. And debt for something worthless is even worse. 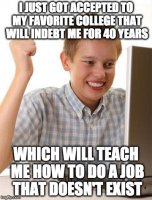 Marley T said:
I have no expirence
Click to expand...

No one is born with experience. You go get it if you don't have it, or you buy it with someone who does.

Welcome to the forum and thanks for the intro.

MJ DeMarco said:
We aren't college haters, we hate debt. And debt for something worthless is even worse.
Click to expand...


really appreciate the reply, hope to hear from you again in my future posts.

MARKETPLACE Freelance University: Solve Every Freelance Problem (Especially on Upwork)
For those who are just seeing this, there are currently a total of 15 live courses and 1...
Yesterday at 1:53 PM
Lex DeVille

MARKETPLACE Fox Web School "Legend" Group Coaching Program 2021
Fox's Web School helps you learn a specialized skill which you can use to get to Fastlane. It's...
Sunday at 8:56 PM
Aarong35