You can read this here also: Starting My First Software Business

Introduction
Since I started my bachelor’s degree in Computer Science I’ve long dreamed of starting a software business. After a couple of semesters went by and I was more comfortable with programming, I’ve decided during the March break of 2020 to finally start.

A Problem To Solve
To make a business you have to solve a problem. I noticed during my studies that I would struggle to focus on my course material because I was addicted to YouTube. Blocking It completely didn’t work. I would often find myself disabling the blocking software.
I thought to myself that I needed to make YouTube itself less addictive without blocking access. A custom software would be needed to achieve this goal.
However, I didn’t know for sure if this problem was specific to me or was common. I needed to verify if it was worth solving for others.

Gauging The Potential Interest
Before writing a line of code, I designed the User Interface of my software and went on Reddit showing and explaining my idea. Reddit is a great platform to see if people are interested in your ideas. You can have feedback in the form of up-votes and comments. There is also dedicated communities for different subjects. The key was to choose the right subreddit before posting. I naturally targeted communities geared toward’s digital minimalism and tech addiction recovery.

The Concept
The initial idea was called MinimalTube. It would’ve been a mobile app that would allow users to search content and add them to a watch list. The searching feature would have to be disabled before users could watch the content they’ve previously selected. It would also keep track of the watch list total duration so one could be aware how much time they were going to spend. 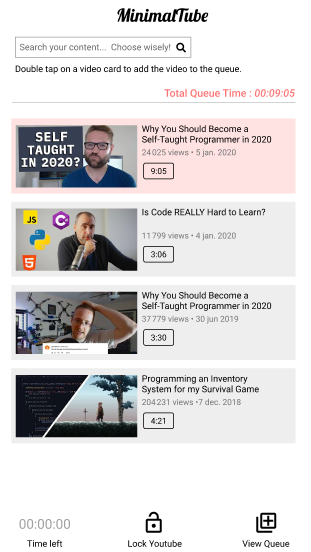 This was the inital design for MinimalTube.
Those visuals got people interested. I then started collecting emails for early adopters who wanted to try the app first hand. Then the problems started…

Trials and Tribulations
When it came to actually make the product, I ran into a major hurdle that I couldn’t have predicted.
The problem was that YouTube imposed the usage of their API if you wanted to publish your app on the Play Store. This was a problem because it had very limited quotas. An API is a third party service that you can use to get access to certain data (ex: Getting the video titles when a user searched something).
It also gave me the sense that if MinimalTube would get too popular. I would have Google’s lawyers sueing me.
Because of this I started to shift the main idea to something else more subtle. A small command line desktop app. 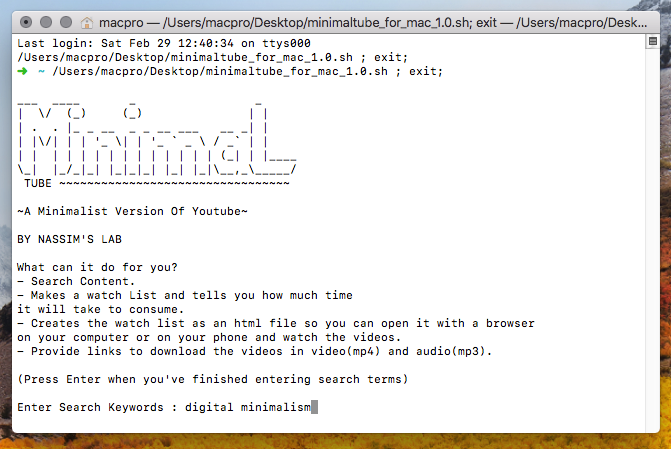 This is how it looks.
This above command line program would generate a watch list that you could open with a web browser. 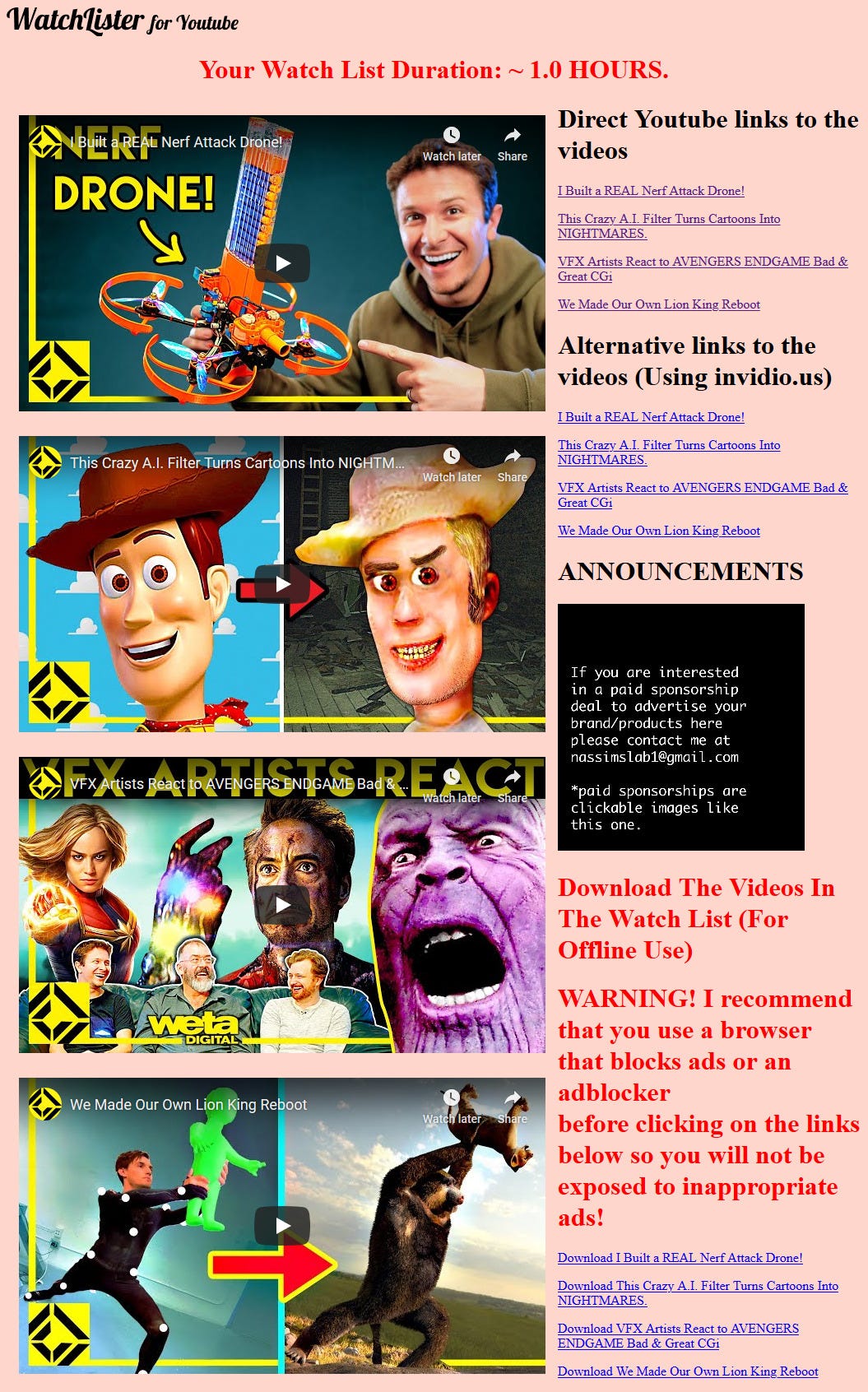 This is an example of a watch list file

Business Model
I’ve noticed that making people pay for something that looks good is easier than something that isn’t. I can’t stress this enough. Making people pay for an ugly command line app would be too difficult.
My idea was to take inspiration from instagram influencers. When a user make a watch list there would be a little click-able square ad space (think paid sponsorships). This model would work only if I had many downloads.
Users could also have the option to donate money.
This is something that I didn’t take much time to think about because its hard to have a sense of how much you should charge or not.

Launching
I didn’t want to pay for a domain or hosting. I simply put my app on a website called itch.io which is known to host indie games. The advantage for using it was that it would be easy to process payments if any and would cost nothing for me to have it up and running.

Results
Conclusion
It was a good first experience. I made 200 downloads with no prior audience. I spent 0$ on all of this and made 3$. I’ve spent a lot of time on this but I’ll hopefully get it back as experience to drive my next venture.

Lessons learned
If you’re interested in using the app head over to https://www.minimaltube.itch.io/mt

Did you consider doing it as a browser extension?
OP
OP

I did consider doing it as a browser extension but I'm currently learning the skills needed to make one so I might do it one day. I wrote the current MinimalTube in python.
S

nassimslab said:
I did consider doing it as a browser extension but I'm currently learning the skills needed to make one so I might do it one day. I wrote the current MinimalTube in python.
Click to expand...

btw just say that the post and project was executed very welll, congratulations to you just for having such a great execution!
OP
OP

Saavedra said:
btw just say that the post and project was executed very welll, congratulations to you just for having such a great execution!
Click to expand...

Solid execution man. What's next, and how are you planning on marketing things for the business?
S

Do you know if it is possible to improve the recommendations in YouTube? right now it recommends tv shows, sports and generally crap, even if you block a lot of them or mark as not interested. could your service do a mass block by keywords or list?
OP
OP

Saavedra said:
Do you know if it is possible to improve the recommendations in YouTube? right now it recommends tv shows, sports and generally crap, even if you block a lot of them or mark as not interested. could your service do a mass block by keywords or list?
Click to expand...

This not what my program currently does but I can sense a big opportunity for this as a browser extension. I would basically use video titles in the recommendation section and match them with terms you have decided to block so to hide them.
OP
OP

Hassan said:
Solid execution man. What's next, and how are you planning on marketing things for the business?
Click to expand...

This is going to be fun to follow along with. Keep up the execution

UPDATE:
I took my app and pivoted to something slightly different. 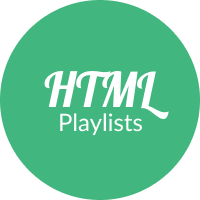 Give this tool a YT playlist ID and it will convert it into a convenient HTML file.

I've put this tool behind a 1$ pay wall and applied the same strategy that I did with MinimalTube.
I'm trying to see how many people are willing to pay.

MARKETPLACE Fox's Web Design Guide: Earn $100K this year (Yes, 2020!) and Go Fastlane
I have zero coding skills whatsoever. Are coding skills needed? Will the be learned in the...
Today at 3:31 PM
Fox

MARKETPLACE How To Create A 100K-1M+ Sales Funnel
@LynX You know, this is a "Marketplace" Thread. Completely appropriate to offer goods and...
Sunday at 12:17 AM
Royce2

MARKETPLACE You Are One Call Away From Living Your Dream Life - LightHouse’s Accountability Program ⚡
Dropping a quick note in here to say... if you are on TFL, you are part of an elite group of...
Saturday at 1:08 PM
LightHouse

MARKETPLACE KAK’s “Kill Bigger” Incubation Program- With DAILY personal attention.
I joined @Kak's business incubator in the first week of May. During our daily chats we uncovered...
Thursday at 11:10 AM
MTF

MARKETPLACE Lex DeVille's - Advanced Freelance Udemy Courses!
This is your May reminder that you can do this. I'll keep it short. These are the May promos...
May 25, 2020
Lex DeVille

MARKETPLACE Grow Your Business With a Book (An Unorthodox Marketing Strategy That Built One of the Largest...
Thanks! This is a cool idea, actually. I would like to use your experience as I heard that these...
May 22, 2020
NatashaPowell