No-Code AI platform but from whom?

With rise of No-Code tools and AI

BTW if this is something you need in your industry I could build it out tailoring to your needs.

Madame Peccato said:
No code and AI are just technologies. What kind of problems could those 2 together solve? Like, what can I build with no code that could be improved on by AI?
Click to expand...

there are plenty of things a person can do and the list is never-ending.

AI at the end of the day(generalizing) is just
1. prediction
2. classification
3. segmentation

the inputs can be a simple excel file or a folder of images.

For example, what ai can do is find whether the customer will buy from you or not, or will it be a repeat customer (you can give a heavy discount to such customers).


there are many ai tools that coming to the market 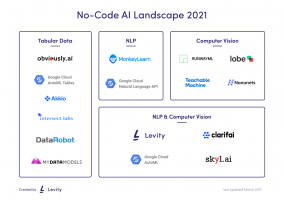 my problem with them is they are for eveybody.
E

I think that the main target audience for no-code ai B2B tool is some kind of consulting/marketing/inegrator company that will build solutions using said tool and sell those to end users.

Raja said:
With rise of No-Code tools and AI

BTW if this is something you need in your industry I could build it out tailoring to your needs.
Click to expand...

Why don't make AI tools and sell them as SaaS? This is worth looking deeper into.

Saad Khan said:
Why don't make AI tools and sell them as SaaS? This is worth looking deeper into.
Click to expand...

Raja said:
this is PaaS a similar idea with difficult entry(built in moat)
Click to expand...

Raja said:
With rise of No-Code tools and AI

BTW if this is something you need in your industry I could build it out tailoring to your needs.
Click to expand...

That intersection is tough beyond platforms (e.g. creating an ML pipeline without code with elements of the pipeline being smart enough to extract features from your data automatically).

To me, no-code is about enabling others to create without code. That's everything from APIs to full-blown SaaS apps. AI is about amplifying people's ability and improving what they already do (automation, streamlining, etc).

So at first glance, it feels like there's little overlap between the two. Rather, no-code brings the initial thing to fruition, then AI can help with tasks to grow it (e.g. marketing) and keep it going (e.g. monitoring, compliance).

Beyond that, I think we run into Hard Problems that are ongoing research areas.

A few ideas though:
- A natural language ORM. Your app reads a database schema and humans check the labelling of the fields to see if they make sense (and modify them as needed). Once that's done, use speech recognition and natural language processing to support simple queries. "What was our best selling product last month?" "What's the average age of the customer who buys {product x}?" No SQL statements, no clicking around.

- Chatbot builder. Rather than using only some WYSIWIG tool that hardcodes chat responses, do that for the basic stuff AND have the app consume a bunch of existing company chat logs, documentation, and call center transcriptions, and turn that data into a question-answer model.

- Visual scraping. Rather than coding a scraper, create something capable of scraping from screenshots.

MARKETPLACE NEW: The Best School for Going Fastlane (Now open for summer enrollment)
Read the free book, some excellent insights. I also did the website quiz and I did a visual on a...
Today at 3:56 PM
VikingRobotHpstr

MARKETPLACE Fox Web School "Legend" Group Coaching Program 2021
Cool - glad to have you. And yes it should help a lot. When you are in the new group just post...
Friday at 9:54 PM
KushShah9492