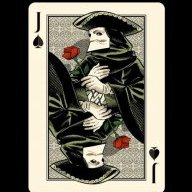 Now, maybe I've just a decent chip on my shoulder and wish to chisel away at that; chisel away at all the negative remarks made my way when I was younger, corporate b*tches (I'm actually no bitter at all!) suggesting I'd be better off applying a sports universities, or teachers telling me I'd better get on learning, 'because not everybody has smarts!' (I'm actually not bitter at all!)

Or I'm just looking at everything with one eyelid closed, so as for that perspective to show me a glass that is half empty -- a glass that's too heavy to lift, a glass that's probably filled with arsenic anyway -- so what's the f*cking point?

But what I've done repeatedly in life, and a pattern's really starting to emerge, is that I start a job, start to hate it, quit it and look at the confounded disillusionment in the faces of colleagues when I tell them (them looking at the disillusionment in my face, likely) that I don't have another job lined up yet. It's actually quite funny seeing the vicarious horror in their eyes.

But you know, I always feel fine. Always feel giddy and hopeful...

...for like 1 month. Then all hell breaks loose on the inside. The gut squirms (because you know how it's the second brain and all) and the mind goes manic, then depressive, in alternations, too. Actions start coming out of a state of fear.

But you know, I want to change all that. This time I have a better plan. I'm here to lay out my goals for 2019, and thought, I might as well post it here, as I'm writing it down for myself.

I know a lot of you might say that I'm just filled with a lot of angst, as my text may be oozing with that. Which is fine. I need feedback. I lust for feedback. So throw it my way. Throw it into the fan of my reality and let it cover the white-washed and delirious mind and cage I've created for myself.

On the whole, I've got to say, despite circumstances being fairly equanimous, life's freaking me out a bit.

If you've read the Alchemist -- God, I love that book -- you'll know that the "universe" tests you at the hardest times. All the shit comes together to test your wits and see to it, that you marshal the forces of potential within you, all that you've learned, all that you've done, all that you've brought with you up to that point, and all that you've left behind, into this moment in time -- to see you fail or succeed.

So all you need to remember, is that you'll succeed no matter what. And we know this right? We tell ourselves, 'Ah, shucks, look, even if I fail, I'll have learned in failure.' But forget that, too. All you gotto know is that, whether you'll be OK in life or not, is not dependent on the kick you have to take (this is from a podcast by Michael Neill). You'll be OK no matter what. Stop looking at how much you can learn, stop looking at how much you gain to gain, because your mind will tell you how much you gain to lose, too.

In any case, you may disagree, but it is my experience.

You might be saying, tell us your freaking idea!

Well my idea is this is threefold -- and maybe that is too much:
It's going to be the trifecta of my life, the trinity of my destiny, the ... you get the gist.

A YouTube channel for watch reviews
+
eCommerce store for watch straps
+
A job that makes ends meet and leaves me enough time for myself. (still looking for a better part for puzzle here)

And all I need is one sale, all I need is that one sale, and after that I can pack my bags, hit the hay, bon voyage to another planet for all I care, because I've done it. I've done it. And it's that or I keep growing what I've got. And don't they say that it's easier to keep going once you've got going? I mean, it's hard stop once you've got a slick breast stroke going (or stroking breasts), right!

I know this for a fact because I took cold showers for 10 months once, and the only thing that stopped me was a French shower that I didn't know how to work. It was easier to say no to the warmth as some point, to keep that chain going (for no real good reason, mind you) and to decide to take just another cold shower. To gain something in life, often you have to risk. You risk getting hurt, you risk losing something. In love and in business. But that's the best I can do. I rather risk and have the opportunity to learn and grow than not risk and regret later.

And because I'm a big believer in showing what I've got, only showcasing once I've done, I figure I'll shatter that belief right here and show all the things that I haven't got, haven't achieved; because I feel that I really haven't.

Set up a Shopify store with watch straps

That's it!
Don't like ads? Remove them while supporting the forum: Subscribe to Fastlane Insiders.
Last edited: Jan 13, 2019
Y

Best of luck.make sure to differentiate yourself from your competitors.
And ur business have a real need.

I will definitely try to differentiate myself from the competitors!!!!

young rebel said:
Best of luck.make sure to differentiate yourself from your competitors.
And ur business have a real need.

Thanks for the intro, if the other things don't work out, you might want to consider writing, you write pretty good prose.


ForgetSuccess said:
A job that makes ends meet and leaves me enough time for myself. (still looking for a better part for puzzle here)
Click to expand...

That's what I did for years.

PS: And read the books if you haven't, they might save you a fortune in time and money!
Don't like ads? Remove them while supporting the forum: Subscribe to Fastlane Insiders.

MJ DeMarco said:
Thanks for the intro, if the other things don't work out, you might want to consider writing, you write pretty good prose.

That's what I did for years.

PS: And read the books if you haven't, they might save you a fortune in time and money!
Click to expand...

Read Millionaire Fastle, REALLY enjoyed it and loved your perspective on things. Also kudos to the style of writing in the book, which brings with it a lot more style than most of the humdrum-dry stuff you find online and in books nowadays...

I do want to read UNSCRIPTED next!

edit: thanks for the comment on writing and the tip (just saw that). I've been thinking about just writing more to hone that craft and see where it can take me.
Last edited: Jan 15, 2019

Using this post to say that I will link up my shop to Oberlo just to be able to play around with the design better.

A lot of distractions had come my way in the past week, as it's just about crunch time in regards to needing to get cash in my hands fast.

The good thing is, you always meet new people and opportunities arise you could have never planned for.

So, while things could be better on the front where more of my focus should be, having the scope turned away for a little time was good, too.
Last edited: Jan 20, 2019