these whole new domain endings seem pretty nice.. but i dont see a legit website with an endling like .online or .kitchen.

maybe they will be more and more in use in the next few years? or maybe nobody will care for .food and .dog?

what is your point of view? how do these exoitc domains rank compared to .com .net and more "common" endings?

They rank based on inbound links, just like any other domain. No one ever got rich from a good business name or good website URL.

The only problem with them is verbally "go to thebest dot kitchen" confuses people versus "go to thebestkitchen dot com" since they associate the phrase "dot com" with a website url.

These other ones I'd get as a bonus, probably cost a tener a year?

These other ones I'd get as a bonus, probably cost a tener a year?
Click to expand...

yeah they are very cheap... and it is possible to get quite cool names with the ending. ilovemy.kitchen or such stuff... but i dont know if that is just playing arround or if they will rank and be seen like a "normal" domainending.

Sorry for one word but the answer is "crap"

Agreed, as someone who owns and flips domains, there are pretty much worthless. Sometimes nice to have for tracking purposes, like if you need more domains to track sources, but you would have to use it online only as a link. As said above, anything over print, radio or tv will confuse people.
- To avoid criticism, say nothing, do nothing, be nothing -​

TLDs aren't taken into consideration when ranking in Google.

Extensions with a high ratio of bad to good sites like .loan terrible to use.

.io is interesting, and popular among the geek crowd at only 0.5%

Generally though, people trust their own country's domains: 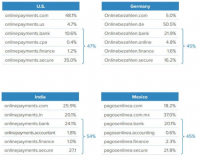 In the US however, com is the default since the internet came out of here.

Just like the British stamp is the only one in the world that doesn't have to identify it's country of origin. Since they invented stamps.

It also seems, that countries with closer ties to the US, (India) have higher approval of coms. Vs countries that rely less on the US' influence. (I don't have a source for this, just an observation)

Depends on the TLD and the industry.

My industry has one, I own it for my brand, but am watching on the sidelines with it. A couple of other brands have made the jump and use it exclusively.

I think it can work well in select cases when tied into a word or phrase.

My airbnb host years ago worked for Ticketmaster and spent over $1,000,000 to secure the rights to register .tickets websites. I don't think it worked out for him!

It depends, I go to a lot of coding resource sites, and .io has kind of become standard and I like it.

Always have a .com as backup though.
No one user programmed me, I'm worth millions of their man years!

In my opinion, it doesn't matter if you run paid ads.

Sanj Modha said:
In my opinion, it doesn't matter if you run paid ads.

There *might* be SEO pros or cons but I don't do SEO to know enough about it.
Click to expand...

No one user programmed me, I'm worth millions of their man years!

MARKETPLACE 7 Days To Freedom: From Wantrepreneur/Wage Slave To Freelancer
A BIG THANK YOU FOR EVERYONE WHO PARTICIPATED! Thank you very much for joining, participating...
Yesterday at 6:55 AM
Black_Dragon43

MARKETPLACE Fox Web School "Legend" Group Coaching Program 2021
@Fox It's same with me Did both quiz and application but as yet no automatic confirmation, just...
Saturday at 7:10 AM
Fox
M
Introducing MJ's Personal Unscripted Network, Join Now for FREE!
If you are in IDEA mode, text "IDEA" to the above number. If you are in LAUNCH/START mode, text...
Apr 22, 2021
MJ DeMarco