I'm looking for info, books perhaps, from copywriters or sales strategists who've offered sound advice/strategies on marketing and selling consulting services to executives. Or maybe someone here has a few tips from experience?

This is to try and find some clarity for a potential client (I'm a copywriter), so I'm just researching here at the moment.

Asked on FB and was referred to a book called "Selling To Vito," so going to start there.

But I'd be handicapping myself if I didn't throw the question out to the fastlaners too!

dru-man said:
I'm looking for info, books perhaps, from copywriters or sales strategists who've offered sound advice/strategies on marketing and selling consulting services to executives. Or maybe someone here has a few tips from experience?

This is to try and find some clarity for a potential client (I'm a copywriter), so I'm just researching here at the moment.

Asked on FB and was referred to a book called "Selling To Vito," so going to start there.

But I'd be handicapping myself if I didn't throw the question out to the fastlaners too!

{Success Story} Feeling stuck? A six month case study of when I dropped everything to buy a business
OP
OP

Thanks. Can you elaborate on what type of value-adding messages you've had success with? Usually execs are way more resistant to standard content marketing and email approaches than other professionals.

I can see a quick and to the point mention of a unique strategy and relevant results working in an email approach, if you get past the gatekeepers, but not so much dumping a "value bomb" on them.

Wouldn't think they spend a lot of time reading emails hoping to stumble on something valuable enough use - they'd get lost in a sea of info and sales pitches fast. They're also well aware of more traditional sales processes and (ironically but understandably) have an aversion to being the target of it, even if they train their own staff to use the same principles.

Feel free to correct me where I'm wrong, but I think this market is a lot tougher than you've implied. Maybe you mean a specific type of value and not value in the content sense? Some elaboration would be much appreciated.
Last edited: May 6, 2019

Not sure how big of a company we're talking here, but Selling to Big Companies by Jill Konrath is thorough.

I imagine @Kak would be able to help, although probably needs more info.

In my experience, execs are only interested in sales. If you're not going to bring more bacon, they won't respond.

I've sold into a "large" company once, and talked to several multi-million $$ founders regarding them buying our product on several occasions. This guy being the most prolific example.

I'll explain how my sole experience came about: 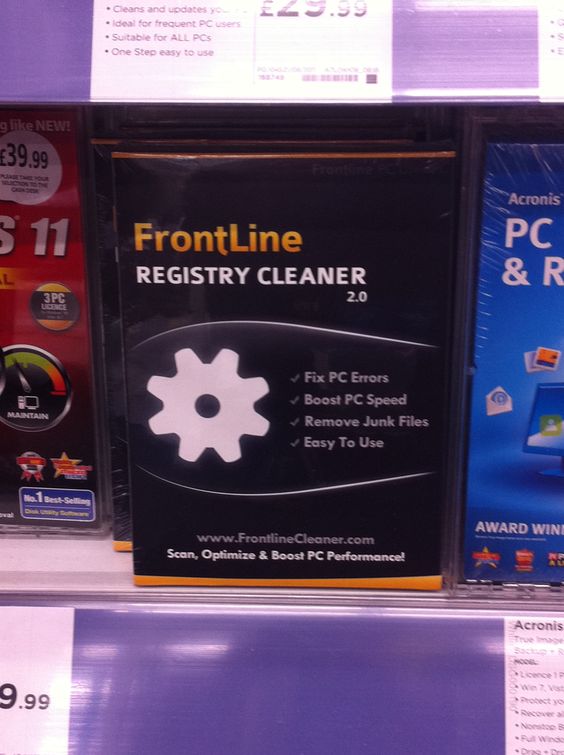 This is our old "registry cleaner" product. I'm writing a huge 24k+ work post which explains how I got involved with this -- for now, I'll just say that I got lucky with some SEO and eventually started selling a lot of this type of product (originally as an affiliate and then as a product owner).

Due to the release of our "2.0" version (as shown above), my business partner and I decided to try our luck getting it stocked by stores. I was reticent to do it (Biz partner: "Richard, we need to get this stocked by Currys", to which I replied "Go on then").

Since we had a decent product, my biz partner started emailing retailers and distributors. After 3 days, he had 1 reply. Obviously we needed to do something to gain attention. To this end, I decided to go glory-hunting, and approached the biggest whale I possible could think of... Currys. Currys is the UK equivalent of Frys, very successful and renowned. If you're stocked by them, you're a big deal.

After I came home one evening, I used CEOEmail.com (strongly recommended) to find out who the CEO of Currys was, discovering it to be John Browett. I read up about Mr Browett and found him to be a sailing enthusiast, so I wrote an email to him explaining we had a product with over 3,000 sales (which was true), that I had been a passionate sailor in my teens (true), and that we were looking for stockists.

I thought nothing more of it... until an hour later, he responds. He passes the email onto his second-in-command, and instructs a distributor to "look at the product". I immediately started talking to the distributor, even changing their contract to suit my own needs, in order to get the product stocked.

About a month after initial contact, we had a consignment order (which means the company take the product for free and pay us depending on how many sell). The big deal for me was the namedrop

Again, I've almost finished a 24k+ word post about this stuff, which I'll post after I get permission from MJ.

Are you selling to the owner or not?

Selling to an employee often means trying to figure out what they need to “look good”, keep/advance their position, and/or have an easier life.

Some great advice I was given was:

“Your client is the person who signs off on the invoice.”

Get him sold on your product/service and help him sell into the business.
“Never worry about numbers. Help one person at a time, and always start with the person nearest you.”
(Mother Theresa)

dru-man said:
have a ton of other people trying to offer them "value" as a foot in the door
Click to expand...

Actually this part is incorrect. Bob and Sue who run the local plumbing business have 10x the amount of people calling them up and trying to sell them something.

Few people have the courage to actually make contact with the executives. Even fewer have the persistence to follow up and follow through. Expect a longer sales cycle but if that is your target then it can be done.

Get to the point. Tell them you help them specifically. “Fortune 500 Companies, CEO’s etc” Do not tell them that you help “businesses”

Call them. Email them. Write a hand written letter if you have to, because are correct that the cut and paste email the typically person would send will be deleted immediately. Or...get on a damn plane and see them in person! Shocking I know, but if you want to sell at that level, that’s your best option.

The absolute best way is to try and find a introduction. This is where LinkedIn comes in handy. If you have a genuine mutual connection they will give you 10 minutes of their time. It’s how they play the game.


dru-man said:
Feel free to correct me where I'm wrong, but I think this market is a lot tougher than you've implied.
Click to expand...

I’d argue that it’s harder fighting with thousands of others for the business of the smaller guys. Do not confuse this with easier. It takes guts and persistence, but no, it is not tougher. And it’s 100% possible.

You also will find very little info on this in books, so my compliments on asking the forum here. Change the thread title though to “Selling to CEOs” it’ll get more attention and hopefully more advice.

@rpeck90 Normally I wouldn't bug the CEO, but glad it worked out for you this time.

There are people at most of these larger retailers who literally are employed specifically to buy things that make sense for the company.

My advice is to find out who they are and make a case that you do make sense.

Not salesy. Not the time for copywriting. Keep the dialogue open and get them used to saying yes to you with incremental asks.

@GPM is highly qualified for this discussion.
Last edited: May 7, 2019
The Kill Bigger Radio Show
Listen to Episode ZERO - 3 Min
Send a voice message and be featured on KBRS!
Incubator Program

ever seen the movie Wall Street? how does he get to see Gordon?

big company ...... be ballsy and hit up the CEO direct or find the buyers like @Kak said. build a grass roots support for your product in the divisions and then have them push for it so the CEO tells the buyers to give you a shot

mom and pop, show up at a non busy time and present value to make their life better

Everyone who is doing anything significant is busy brother.

You got me to respond to this post didn't you???
"Pressure makes diamonds."

{Success Story} Feeling stuck? A six month case study of when I dropped everything to buy a business

MARKETPLACE Kill Bigger Incubator
@Kak Out of curiosity, what types of businesses are you advising on? (I read this whole thread...
Today at 11:34 AM
Kak

MARKETPLACE Fox' Web School's "Legend" Group Coaching Program 2020
Thanks for the detailed response. I see it similar, in the beginning, you have only a small...
Sep 15, 2020
Kasimir

MARKETPLACE Grow Your Business With a Book (An Unorthodox Marketing Strategy That Built One of the Largest...
Thanks for your offer to look at my book. Here's the link to the squeeze page Buy The Prosperous...
Sep 11, 2020
MTF
M
FEATURED! Introducing... WEALTH EXPO$ED, A Short Story By MJ DeMarco
Just bought it! I'm about to devour it!
Sep 1, 2020
Ish Ma

MARKETPLACE You Are One Call Away From Living Your Dream Life - LightHouse’s Accountability Program ⚡
The day I can afford to pay 800 a month to have someone keep me accountable is the day I've won...
Aug 21, 2020
guidaccio05