So today in Dallas they recovered a stolen painting. Here is part of the article, "Our specially trained investigators and attachés in more than 40 countries not only partner with governments, agencies and experts who share our mission to protect these items, but they train the investigators of other nations and agencies on how to find, authenticate and enforce the law to recover these items when they emerge in the marketplace.".

So they have SPECIALLY TRAINED people on this case and from around the world and I promise on my entire family's grave this is what happened this morning. My wife picked up her phone and this is what she heard, "Hi, where could I store a stolen painting?". Nothing about who this lady was or that she was from Homeland Security or what had happened..... this was before it was released to the public I guess because no one at the museum had a clue. So my wife said they would need to call a company called Displays. Then the lady asks if they could keep the painting in my wife's museum' vault. lmao Nooooooooo! You will need to call Displays because they specialize in this type of thing. The lady acted as if it could be stored in any ol' place. First, it needed to be checked over and dealt with accordingly for insurance reasons. It was after this that the lady on the other end explained about the stolen painting. Now I might add, Displays does this all over the world! Not just local, not just in the USA..... the entire WORLD!!! Wouldn't you think if Homeland Security is working with 40 other countries to do this type of thing, they would have a clue on what to do with something when they recover it. The US is in SOOOOOO much trouble. I bet if you put every government official together their IQ wouldn't amount to 7.

I went up to the museum later and as I was being told in the office what happened and I told them what my 1st question would have been when the lady asked where she could store a stolen painting..... Well, where did you steal it from? Even the director laughed at that one

If we are #1 in the world, the world is in BIG trouble!

I have no idea what I just read.

Are you sure they weren't just acting clueless to test your wife's museum to see if they were the kind of people who would go in cahoots with art thieves or if they would do the right thing?
My progress thread

MJ DeMarco said:
I have no idea what I just read.
Click to expand...

You should keep up with the world more MJ.

Well, to make it short.... The Assumption of the Virgin Mary was recovered in Dallas and Homeland Security called my wife thinking they could just take it over to the museum and store it there until they could figure out what to do with it. They are Homeland Security, shouldn't they have atleast 1 lick of sense?

It has to be condition checked, the insurance has to be notified, along with several other things that would need to happen before that piece is even moved!

Do I need to slow it down for anyone else? I know Braille so I can give it to you in Braille if needed. 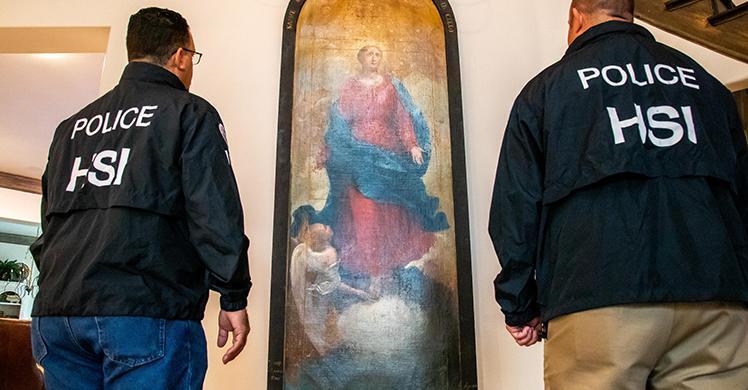 U.S. Immigration and Customs Enforcement’s Homeland Security Investigations in Dallas has recovered a 19th century painting that was stolen from the Abbey of Santa Maria in Sylvis in Sesto al Reghena, Italy, in May of 2002.

Bekit said:
Are you sure they weren't just acting clueless to test your wife's museum to see if they were the kind of people who would go in cahoots with art thieves or if they would do the right thing?
Click to expand...

That is exactly what she thought at first because the lady did not identify herself. So my wife called the director.

Well, not to go in to cahoots because her museum is one of the most trusted museums in the whole world but she thought something funny was happening.
M

minivanman said:
You should keep up with the world more MJ.
Click to expand...

No thank you, I pride myself on being ignorant to whatever hysteria the media feeds the world.

I also am not privy to your wife's job/career ...

That said, it's not news to me to hear that some government bureaucracy is grossly inept.

I'm sorry but this thread is lacking in efficiency or productive to the fast lane lifestyle members join to see. While I'm glad your painting was recovered I have no input as to the systems of homeland security or the disarray of (insert local region. )

Not only was this entire thread as hard to swim through as the lake of Lethe, I come out of it not blank and eager to learn, but with no news beneficial to humanity aside form a rant I could have found on evil blue or in the darkest of moments Buzzfeed.

I think in the future I'll stay away from the ''New'' button and sort by Hot. Thank you minivanman for that valuable lesson.
What will your legacy look like?
D

Homeland security is a big issue today. As well as environment protection. I think we should do all possible to protect our environment and reduce the human impact on it. Recently I read that nowadays there are huge variety of different devices that work on neutron detection and can detect gamma radiation. Like this one https://ecotestgroup.com/products/cadmium/. These device is widely used by the Border Guard Service and environmental inspections to prevent illicit transfer of radioactive materials across the state borders.
Last edited: Dec 1, 2020

Damnit don’t bump @minivanman threads unless you see some sign of him which I haven’t at all in ages! I’m worried he’s dead, prolly from overdosing on Dr Pepper... but still! I’m worried about the guy!

minivanman said:
They are Homeland Security, shouldn't they have atleast 1 lick of sense?
Click to expand...

Or some government vault with an armed guard?

And wouldn't recoverd stolen art be more an FBI or Customs thing?

MJ DeMarco said:
I have no idea what I just read.
Click to expand...

Homeland security recovers a stolen painting.
They call the local museum to inquire about them storing it there as evidence in their vaults. (i'm assuming because you can't store a painting in any old vault it has to be climate controlled and all
The person that answered the phone was @minivanman wife
Minivanman's wife tells them they can't, they'll have to call a company named Displays which specializes in storing paintings
He's trying to say that a government agency is highly inefficient and doesn't have procedures when they recover stolen items

I had to read it three times to finally get it, maybe he was too excited about the story to proofread it

I'm not surprised that some guy at Homeland didn't know what to do with a stolen painting. And, I think its a good thing that he didn't.

Why? Let's picture what would need to be true if large numbers of Homeland employees knew the protocol for storing high-end paintings: Training courses would need to be created, employees would need to attend those courses, documentation maintained on who has and has not attended courses, system would need to be developed and implemented that walked employees through the details of how to handle high-end art. High-end art goes missing so rarely that it makes national news when its happened. It gets recovered even less often. Training everyone for something that happens a few times a year, nation-wide, is a waste of resources.

I'm sure that someone at Homeland knows what to do, but how would a guy in Dallas know where that person worked and how to contact them? There was probably a case manager on this case, but what if the guy was unavailable? Should you just leave the thing in a patrol car overnight?

Instead, the guy is trained to contact an expert to ask for advice when something like this comes up, even if he thinks he knows what he's doing. (You don't want to mess up the storage of a multi-million dollar painting.) He asks stupid questions because asking stupid questions is better than not asking them and making a mistake.

I remember eavesdropping on project managers at an enterprise software company I used to work at. They asked what I thought were embarrassingly stupid questions - questions I thought they should know the answers to. What I realized later was that even though they could pretty accurately guess at the answer to these questions, getting the answers wrong would cause all sorts of grief later on. Far better for them to sound a little silly up front than to actually be incompetent because they didn't ask a basic question.

I understood this the first time I read it but that’s because for some reason me and the old coot share some weird ADD wavelength...

BUT WHERE ARE YOU @minivanman ?!?!? I’m worried about you you curmudgeonly cantankerous dude!!

For a moment it appeared that "SAD" was some acronym

MARKETPLACE Fox Web School "Legend" Group Coaching Program 2021
Yeah, your youtube channel is incredible and all the videos I have seen so far are really great...
Jan 19, 2021
StephanBg
M
FEATURED! Introducing... WEALTH EXPO$ED, A Short Story By MJ DeMarco
Finally! I just launched a short story on Kindle (FREE if you have Kindle Unlimited)! After...
Jan 5, 2021
Gregory Carson